Ryan Carr Of Carr Winery and his Adventure

“In order to get into the wine business, you have to be adventurous.”

Ryan Carr of Carr Vineyard and Winery is indeed adventurous! His first job was making snowboards, then went to the University of Arizona for graphic design and worked for a landscape company. It was in college that he took a class on plant science, a seed was planted, and since 1999 he has been farming vineyards and making wine– what an adventure! When Ryan made his way to the Santa Ynez Valley he thought he would start a graphic design business. Little did he know he know the adventurous path that laid ahead…

Starting on the farming side of the industry in 1998, Ryan began working for viticulturist, Craig McMillan. Getting outside to escape the computer was a no brainer for Ryan, he fell in love with being in the field, and before he knew it he was helping lay out and plant vineyards.

Developing relationships from his vineyard work Ryan was able to get his hands on some extra Cabernet Sauvignon fruit in 1999. With that and the help of some food grade trash cans, he made his first batch of ‘home’ wine, producing about 10 cases. That wine was given to friends and family, who actually LOVED it!

In 2000 Ryan was approached by Andy Kahn who had just started his own winemaking facility. Starting up his new business and tight on money, Andy suggested Ryan work for him (for free) in exchange for winemaking help and the use of the facility. Not willing to pass up the opportunity Ryan jumped in. He made his first 325 cases with 1.5 tons of Cabernet Sauvignon, 1.5 tons of Cabernet Franc, and .5 tons of Pinot Noir. That was the beginning of the Carr label. Each year they continued to make more wine, and after several years Ryan really had a good thing going.

“As a farmer I am trying to represent the exact location more than anything. So it’s a hands off approach to wine making. Very minimal additions, and manipulation.”

One of the main factors that sets Carr apart from other wineries in our area is that they lease vineyards throughout Santa Barbara County; including Sta. Rita Hills, Los Olivos District, Santa Ynez Valley, Ballard Canyon, and Happy Canyon. Growing in all of these locations allows Ryan to get to know and see the differences in each growing region and make many different varietals.

California in general is a young wine region, so Santa Barbara is very new in the grand scheme of things. Being a young region we often look at older wine producing regions, such as France and Italy,  for inspiration and advice. With that said, this is not Italy, or France, its California. We are finding our own techniches and styles over the years. You can see it happening in Santa Barbara, with all these sub appellations coming up. The basic understanding as to what our environment can do is increasing.

“Santa Barbara is such a special place, and without the influence of Burgundy we wouldn’t know that Sta. Rita Hills is perfect for the Burgundian varietals. Without the influence of the Rhone we wouldn’t know that Ballard Canyon is the place we should be growing the Rhone varietals, and same for Happy Canyon and the Bordeaux’s. It’s incredible what we can do within such a small area of California.”

Want to meet more local winemakers? Catch our current Featured Winemaker on our blog, or come meet them on the last friday of every month!

Winemaker and Vineyard Manager, Erik Mallea of Mallea Wines has a remarkable talent for understanding the terroir of the vines he tends from which he creates his exquisite wines. As our featured winemaker for the month of January, Erik shared his foreseeable path to becoming a winemaker and the story behind his label.

Part One of our interview with Erik:

His love of farming took him to Oregon and New Zealand where he worked in viticulture and winemaking, but his fascination with fermentation began in his teen years back in his rural hometown in Minnesota with Chokecherries, apples, and oats. After receiving his Masters degree in Viticulture and Enology at Fresno State he came to Santa Barbara County in 2007 to pursue his career as a winemaker and vineyard manager.  Currently managing vines for Sanford Winery and producing a stellar line up of wines for his and his wife, Amber’s, Mallea label.

“Observant” was the word Erik gave when asked to describe the part of his personality that gets infused into his winemaking. Instead of approaching winemaking with a specific style, Erik treats each vineyard with a unique approach that requires him to be observant of the land and the process. Mallea wines are sourced from five vineyards that Erik maintains from the ground up.

The thoughtful quality that can be tasted in every bottle can be experienced before the bottle is even opened. The coat of arms on the Mallea labels are a tribute to his father’s family coat of arms passed down from the Basque Country;  the story behind this coat of arms takes you back into another time. If a wine label can influence the flavors and depths of character in a wine, either through it’s mere presence or the subtle feeling it evokes before sipping, then we suggest you listen to Part Two of our interview with Erik.  The background story that makes up this coat of arms is inspiring and lives on not only in the Mallea family but also in the Basque region.

PART TWO of our interview with Erik: 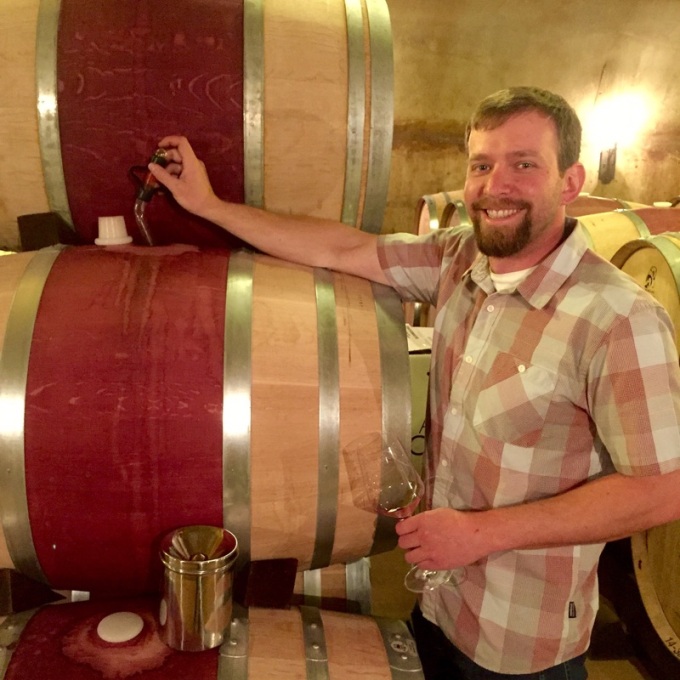 The Grassini family are firm supporters of sustainable and renewable business practices. The vineyard and winery are not only solar powered but irrigated with a well-fed lake on the property, in addition all the water used in the wine production is reclaimed and used to irrigate the landscaping surrounding the winery. The wine cellar is embedded in a hillside to ensure humidity and temperature control using limited energy sources.

The vineyard management team has been with the family since planting the vines in 2001. They have 35 acres planted to vine, varietals include Sauvignon Blanc, Cabernet Sauvignon, Merlot, Cabernet Franc, and Petit Verdot. Each lot from the various vineyard blocks are fermented individually to ensure proper fermentation temperatures. After generous amounts of time in barrels the wines mature to express the unique character of this special estate and those who work there. Their 2014 Sauvignon Blanc is a uniquely floral addition to our by the glass options.

Tune in every month to our Featured Local Winemaker series.

When you combine the Los Olivos Wine Merchant & Café with Wes Hagen of Clos Pepe for a winemaker and pairing dinner, you get an exceptional culinary evening that is not only “UnTraditional” in it’s bold wine and food pairings, but an experience that leaves you surprisingly convinced that, as Wes claims, beer and wine truly are the foundations of all modern civilization.

The “UnTraditional” Winemaker and pairing dinner on June 7th started off with Wes introducing himself and promising to give, over the course of the evening, an explanation of each dish before it was served and, at some point, the history of why wine is the most important fermented beverage in the world…in 5-min. As an example, Wes emphasized the importance of gathering friends and family together around tables, such as those that evening, to share a good bottle of wine and linger to talk and connect in a way that is not possible through electronic gadgets. That face to face connection, enhanced by a glass or two or three of wine, often brings out the true natures of companions, and is a space where novel ideas can flow and alliances can be formed.

With the first course, Wes explained that he collaborated with Chef Chris Joslyn on a menu that would go beyond the usual, traditional pairings, and reach for courses that were a little outside the box; a little untraditional, but

As the evening progressed that culinary bar got higher and higher. The appetizer was followed by a small plate which featured a Fanny Bay oyster beside a Short Rib croquette, paired with a steel barreled Clos Pepe Estate 2012 Chardonnay, “Homage to Chablis.” The third course brought the same pressed grapes back to the table, but this time having been fermented in an oak barrel so that guests could easily taste the difference between the two processes. Paired with grilled Longline Sword Fish, leeks, sweet corn, fingerling potato, and a lemon buerre fondue, the Clos Pepe Estate 2012 Chardonnay “Barrel Fermented” was the perfect compliment.

Moving on to the red wines, the fourth course introduced Clos Pepe Estate 2011 Pinot Noir to the table. Paired with a roasted chicken roulade, Oyster and Shitake mushrooms, braised chard, and chicken jus – the course melted in your mouth. A Cassoulet of pork sausage, pork confit, slab bacon, and duck confit was the feature of the fifth course. Neatly baked into small ramekins, this was the grand crescendo of the evening, and was excellently paired with the Clos Pepe Estate 2012 Pinot Noir.

Before the final course of assorted cheeses paired with an Olin 2007 Cabernet Sauvignon, Wes delivered on his promise to explain why wine was the most important booze in the world and was the reason we have advanced in our civilization. Perhaps it might have been a little more than 5-min, but no guest complained. They would have sat there for an hour more listening to Wes deliver his information in such an accessible, humorous style, and with such an infectious enthusiasm for life.