When you combine the Los Olivos Wine Merchant & Café with Wes Hagen of Clos Pepe for a winemaker and pairing dinner, you get an exceptional culinary evening that is not only “UnTraditional” in it’s bold wine and food pairings, but an experience that leaves you surprisingly convinced that, as Wes claims, beer and wine truly are the foundations of all modern civilization. 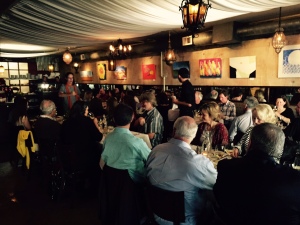 The “UnTraditional” Winemaker and pairing dinner on June 7th started off with Wes introducing himself and promising to give, over the course of the evening, an explanation of each dish before it was served and, at some point, the history of why wine is the most important fermented beverage in the world…in 5-min. As an example, Wes emphasized the importance of gathering friends and family together around tables, such as those that evening, to share a good bottle of wine and linger to talk and connect in a way that is not possible through electronic gadgets. That face to face connection, enhanced by a glass or two or three of wine, often brings out the true natures of companions, and is a space where novel ideas can flow and alliances can be formed.

With the first course, Wes explained that he collaborated with Chef Chris Joslyn on a menu that would go beyond the usual, traditional pairings, and reach for courses that were a little outside the box; a little untraditional, but 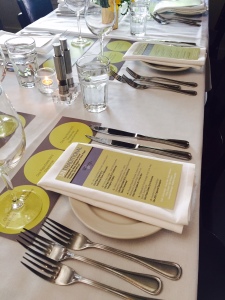 As the evening progressed that culinary bar got higher and higher. The appetizer was followed by a small plate which featured a Fanny Bay oyster beside a Short Rib croquette, paired with a steel barreled Clos Pepe Estate 2012 Chardonnay, “Homage to Chablis.” The third course brought the same pressed grapes back to the table, but this time having been fermented in an oak barrel so that guests could easily taste the difference between the two processes. Paired with grilled Longline Sword Fish, leeks, sweet corn, fingerling potato, and a lemon buerre fondue, the Clos Pepe Estate 2012 Chardonnay “Barrel Fermented” was the perfect compliment.

Moving on to the red wines, the fourth course introduced Clos Pepe Estate 2011 Pinot Noir to the table. Paired with a roasted chicken roulade, Oyster and Shitake mushrooms, braised chard, and chicken jus – the course melted in your mouth. A Cassoulet of pork sausage, pork confit, slab bacon, and duck confit was the feature of the fifth course. Neatly baked into small ramekins, this was the grand crescendo of the evening, and was excellently paired with the Clos Pepe Estate 2012 Pinot Noir. 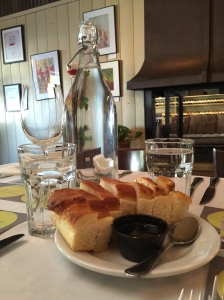 Before the final course of assorted cheeses paired with an Olin 2007 Cabernet Sauvignon, Wes delivered on his promise to explain why wine was the most important booze in the world and was the reason we have advanced in our civilization. Perhaps it might have been a little more than 5-min, but no guest complained. They would have sat there for an hour more listening to Wes deliver his information in such an accessible, humorous style, and with such an infectious enthusiasm for life.